Cold Spring Harbor Laboratory (CSHL) has been named a Milestones in Microbiology site by the American Society for Microbiology (ASM). This ASM program recognizes institutions and the scientists who worked there that have made significant contributions toward advancing the science of microbiology. A ceremony unveiling the plaque that will mark the site was held on Friday, August 24th, at Grace Auditorium during the CSHL meeting on Bacteria, Archaea, and Phages.

Since its opening in 1890, the Cold Spring Harbor Laboratory has significantly advanced the science of microbiology through its research and education programs. “An intensive summer course on bacterial viruses (or phage) begun at Cold Spring Harbor Laboratory in 1945 resulted in advances in bacterial and phage research that led to our understanding of what genes are and how they are expressed, and ultimately germinated the field of molecular biology,” according to Stanley Maloy, a Past President of ASM who presented the commemorative plaque.

“In addition, each summer Cold Spring Harbor Laboratory held meetings that facilitated the enthusiastic exchange of new discoveries and ideas in the rapidly growing field of molecular biology, stimulated largely by microbial geneticists. These discoveries have influenced every aspect of microbiology.” Maloy says.

The phage course continued for many years and by the mid-1970s had evolved into a course on Advanced Bacterial Genetics that taught new generations of scientists how to use new genetic tools that fertilized the biotechnology industry. Research at the Laboratory has always been associated with major trends in biology: Darwinian evolution, classical genetics, penicillin production, the use of microbes as model organisms to explore fundamental life processes, and the development of molecular biology techniques. The advanced courses and meetings that are still held here make the Laboratory a mecca for microbiologists.

In recognition of all these contributions, the American Society for Microbiology is pleased to designate Cold Spring Harbor Laboratory a Milestones in Microbiology site. By placing explanatory plaques at these sites, ASM hopes to increase professional and public recognition of the significance of the science of microbiology.

Previously designated Milestones in Microbiology are the Waksman Laboratory at Rutgers University; Hopkins Marine Station in Monterey, California; the site of the University of Pennsylvania Laboratory of Hygiene; Scripps Institution of Oceanography; and the Tulane University School of Public Health and Tropical Medicine. 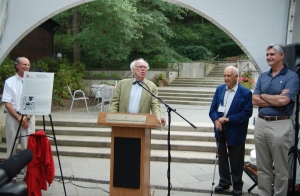